The tall rock cliffs jutting out over Vltava river was populated long before the oldest parts of today´s castle and church were founded. The first settlement of the castle promontory dates back to the Bronze Age.

The original Gothic castle was founded by the Lords of Krumlov some time before 1250. They represented a branch of the powerful family of the Witigonen with the five-petalled rose in their coat-of-arms.

When the Lords of Krumlov died out in 1302, their relatives the Rosenbergs inherited the castle. The Rosenberg family had their seat there up till 1602. There name as well as the three centuries of their rule is connected with the greatest era of flourish of the town and castle. In the second half of the 16th century the castle was transformed into a magnificent Renaissance residence. The town gained most of its present appearance at this time as well. At that time the rulers of the Rosenberg dominion represented eminent personalities among Bohemian aristocracy, educated humanists, patrons of the culture and arts and prominent politicians all filling the highest post within Bohemian Kingdom.

The last member of the Rosenberg family, Petr Vok, sold the Krumlov castle and estates to the Viennese Emperor Rudolf the Second in 1602.

Twenty years later, the Emperor Ferdinand the Second gave the Krumlov estates  to the Eggenbergs, a powerful noble family from Upper Austria. Thanks to Prince Johann Christian I. of Eggenberg, who represents the third generation of the Eggenberg family, more intensive development of farming, building activities and arts was evident in the 1680´s and the Český Krumlov Castle surmounted the period of provincial backwardness and stagnation in economy and arts resulting from the Thirty Years´ War. Prince Johann Christian of Eggenberg converted Český Krumlov Castle into an impressive Baroque seat. 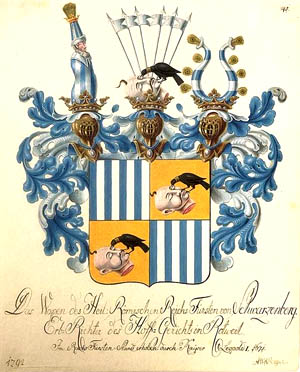 As the Eggenbers died out without successors in 1719, the new dynasty - the princely lineage of the Schwarzenbergs - inherited Krumlov castle and estates. As early as in their second generation Josef I. Adam of Schwarzenberg showed his creative personality. A deft and enterprising businessman as well as a pasionate art lower, he played an important role in the far-reaching reconstructions of the castle. Inclination towards the culture of the imperial residence in Vienna contributed to the enrichment of building innovations as well as of social life at the castle with the cultural impetusof European importance. Towards the end of the 18th century, and especially in the 19th century, the protracted stagnation of art and economy became evident, and after the middle 19th century the Český Krumlov Castle lost its role as the main residence of the Krumlov-Hluboká Schwarzenberg branch and was not regularly inhabited even in the 20th century.

In 1947, the Schwarzenberg property, including Český Krumlov, was transferred to the Czech provincial properties and after the abolition of the provincial systém it became the property of the Czechoslovak State in 1950.